We are delighted to advise that another major purchase has been made to help in the diagnosis and treatment of cancer at Poole Hospital. Two of the scanners in the Nuclear Medicine dept have needed replacement and we have entered into a joint scheme to purchase and install two new SPEC/CT Scanners. The first has been installed and is currently undergoing trials. It is hoped that it will receive its first patients at the end of April.

At that time the second will be on its way whilst work is undertaken to provide an area for the scanner to be housed. It is hoped that all will be completed and the second one installed and fully operational by autumn 2021.

Photos showing the first scanner are shown together with a photo of the ceiling which will provide a restful view along with music of your choice while the scanner is being operated. As is normal the scanners have been named Marie and Louis after Marie and Louis Pasteur.

This work could not have been undertaken without the generosity of donations from the people of Poole and the County of Dorset. 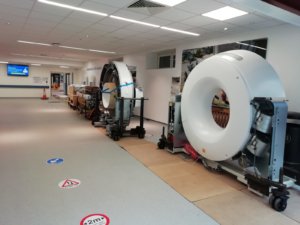 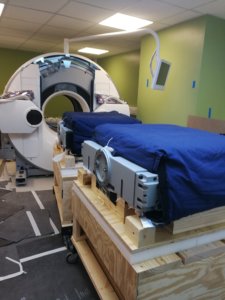 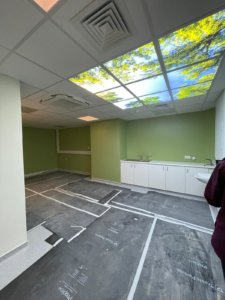